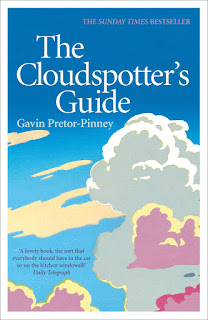 Non-fiction reads are usually a labour of love for me. I start them in a fit of passion and enthusiasm, that then waxes and wanes with my mood, time and other interests.
I ask you to cast your minds back to a time before Covid. A world safe and secure from disease and disaster, when all was calm and peaceful. Yeah, right!
How quickly we forget the traumas and tribulations that concerned us when things were 'normal'.
Back on the 8th January, I was feeling rather distressed by three months of bushfire smoke. Sydney had been surrounded by out of control fires to the north, south and west. It didn't matter which way the wind blew, we were shrouded in smoke and ash. I hadn't seen blue skies or clouds for months. I began to feel desperate for the sight of just one white fluffy cloud! The Cloudspotter's Guide by Gavin Pretor-Pinney called my name, or more precisely the lovely cover by Paul Catherall drew me into it's promise of fair days ahead once more.
I read the first half in a fit of smoky sorrow, seeking the stars and more predictable skies.
But then Covid happened. My reading habits changed. My passions and interests and moods changed. I grew less concerned about blue skies and clouds, and more focused on the invisible germs floating in the air around us.
It has only been with the advent of Spring, warmer weather and the easing of Covid concerns in NSW,  that I raised my eyes to the heavens once again.

I've always been a bit of an amateur cloudspotter.

My interest started when I was about 10. I was required to do a project on the cloud types for school. At the time, I had an uncle who worked for the water board. One of his daily duties was to check the meteorological equipment. He provided me with sheets of information about clouds. I've always loved sorting and classifying stuff, so my 10 yr old self was amazed, then impressed that someone, or multiple someone's, had watched the clouds for so long that there was now a whole system of precise classification and labelling for me to learn.
I have spent many hours trying to find shapes in the clouds. I also found during my teaching years, that cloud gazing was a fabulous way to calm anxious or frenetic classes.
Recent social media tags have given me the joy of following #cloudporn and our house in the mountains has introduced me to the joys of watching the mist ebb and flow through the gum trees. The Cloudspotter's Guide was simply waiting for the right time to jump out of my TBR pile.

Pretor-Pinney has created a lovely looking book for those of us devoted to gazing at the skies. The book aims to provide the facts about 'all the delightful and eccentric characters in the cloud family' for the general reader. He has included poems and charts and pictures in a glorious 'celebration of the carefree, aimless and endlessly life-affirming pastime of cloudspotting.'
In 2004 he started The Cloud Appreciation Society.

There is a cloudspotter's Manifesto and lovely wood engravings gracing the first page of each chapter by Bill Sanderson. Myths, legends, religious beliefs and stories about clouds are littered throughout the facts and figures.

I learnt a lot too. 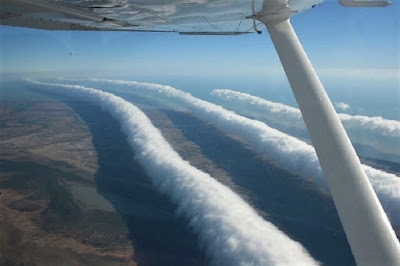 The Cloudspotter's Guide is definitely a keeper.
Posted by Brona Labels 2006, Non-Fiction, Science, Weather at 23.10.20
Email ThisBlogThis!Share to TwitterShare to FacebookShare to Pinterest