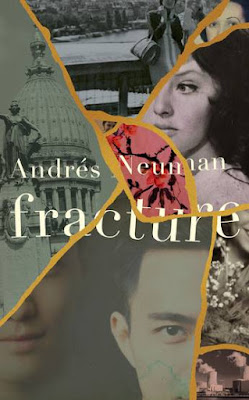 What a wonderful reading experience!
From the beautifully designed hardcover dust jacket (the gold seams actually sparkle in real life), to the impressive translation that seems to have captured the beauty and thoughtfulness of Neuman's original story, Fracture is a journey to savour.
I knew I was in for a treat from the very first sentence, “The afternoon appears calm, and yet time is waiting to pounce.” This leads us into the startling realisation that we are about to feel the tremors of the 2011 Tohoku earthquake and tsunami in Tokyo, along with our protagonist, Yoshi Watanabe.
The fear and shock of the magnitude 9 earthquake, followed by the images of the horrifying tsunami and the subsequent Fukushima Daiichi nuclear disaster, take Yoshie back in time.
Time and it's passing, memory and what we choose to remember and what we choose to forget become the central themes in Neuman's story about Yoshie, a survivor of the bombing of Hiroshima and Nagasaki by default. Yoshie is a hibakusha, a person affected by exposure to an atomic bomb, in a country unable to talk about it. His life is fractured, broken. He spends the rest of his life trying to piece it back together.
Neuman is a writer not afraid to take a risk with his writing.
He's an Argentinian man writing about a much older Japanese man, from the perspective of numerous women living all around the world (Paris, New York, Argentina, Madrid). We have Yoshie's narration about life in Tokyo now and his remembrances of the war, and we have these women reflecting on their time with Yoshie. What he was like at that period of his life, their views on how the war affected him and why their relationships with him ultimately failed.
Writing and reading is all about the journey into someone else's world. The oft quoted Atticus Finch saying about 'you never really understand a person until you consider things from his point of view . . . until you climb into his skin and walk around in it' is very true about Yoshie's story. Neuman gives us multiple ways to climb into Yoshie's skin, because if he had left it entirely to the very reserved Yoshie, our insights would be greatly diminished.
For some unknown reason, I've found it very difficult to adequately document my journey with this book. This response has taken weeks to complete.
Fracture was a slow, considered read. Thoughtful and thought-provoking. It delved into many of my favourite themes. From very early on, I considered this book 'a keeper', deserving of a reread and a much coveted position on my groaning bookshelf. I savoured every minute, every word, but I simply don't feel like gushing or raving or shouting about it from the roof tops. It's not that kind of book, I guess. It's contemplative and quietly spoken, much like Yoshie himself.
Sometimes, some books, just need to be sat with quietly.
The Guardian | Lucy Popescu | 9 June 2020

A prolific writer, Neuman – born in Argentina, now based in Granada – delights in language and linguistic ambiguity. In Fracture, he explores the fragmented nature of memory, emotional scars, a city’s wounds after a disaster and the cracks in a relationship caused by cultural difference. He draws profound parallels between collective traumas – Japan’s bombing, Vietnam in 1968, Argentina’s “disappeared”, Chernobyl and the 2004 Madrid train attacks. Recalling Japan’s enforced silence in the war’s aftermath, Yoshie’s Argentinian girlfriend, Mariela, ponders: “Maybe the most brutal thing is not that you were bombed. Most brutal of all is that they don’t even allow you to tell people that you’ve been bombed. During the dictatorship here they would kill one of your children and you couldn’t tell anyone.”

...the ancient art of kintsugi. When a piece of pottery breaks, the kintsugi craftspeople place powdered gold into each crack to emphasise the spot where the break occurred. Exposed rather than concealed, these fractures and their repair occupy a central place in the history of the object. By accentuating this memory, it is ennobled. Something that has survived damage can be considered more valuable, more beautiful. (my highlights)