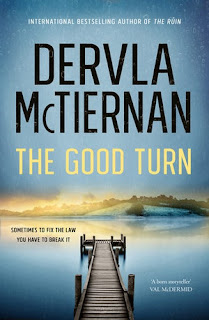 Police procedural is not my usual fare, but sometimes book club leads me down a path I wouldn't choose for myself, yet it turns out okay in the end. I very nearly used the 'not enough time' excuse to not read this book, but a recent rainy weekend gave me a chance to check it out. I was curious to see if I could read the third book in a detective series and still follow what was happening (it's a question we often get asked at work - for this series and many others).
I can happily say that The Good Turn can be read as a stand alone story in it's own right, although the main detective, Cormac Reilly obviously has some relationship issues that get played out over the other two stories (The Ruin and The Scholar).
Galway is the Irish city at the centre of this story featuring a young Garda, Peter Fisher who gets caught up in a case of office politics and corrupt cops. The story is pretty straight forward, but the two main characters in this drama are very likeable (I hope McTiernan creates more appearances for Fisher. I enjoyed watching a young officer learn the ropes).
Not sure what else I can say really, without giving away the story.
McTiernan's style is easy to read and pretty gentle. She's not an advocate of the red herring (unlike Agatha Christie), there is very little blood, guts and gore and absolutely no intense forensic detail (a big plus in my books!) In fact, it felt like a cross between an episode of The Bill and Ballykissangel. Again, that's a good thing. There was a gentleness, or a kindness inherent in The Good Turn. Even though there were bad cops and bad guys, the general tone was one of people trying to do their best, sometimes in tough situations.
I enjoyed my time in McTiernan's world well enough, but cop books are just not my thing. I don't feel the need to read any more, yet I can see how these books and this author could attract a following.
McTiernan was an Irish lawyer who emigrated to Australia after the GFC. With two young children, she chose to work part-time and write, eventually securing a publisher, and now a TV deal. She lives in Perth, WA with her young family. I noticed that Garda Peter Fisher mentioned, in passing, something about moving to Australia when he was feeling disaffected with his career path - perhaps McTiernan is laying the ground work for a spin-off detective series set in Australia? I'm sure her fans would be delighted.
Posted by Brona Labels 2020, Aust Women Writers, Book Club, Crime, Detective, Ireland, Police Procedural, Series at 6.6.20
Email ThisBlogThis!Share to TwitterShare to FacebookShare to Pinterest