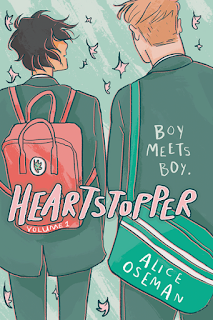 How can someone so young be so successful already? Alice Oseman has been a YA publishing sensation for 6 years now. She was only 19 when her debut YA novel, Solitaire first appeared.
Solitaire is narrated by Tori Spring 'a pessimistic...teenage speed skater with a penchant for solving mysteries'. The story is all about her, but Tori's younger brother, Charlie and his doting boyfriend, Nick appear in the background.
As time went by, Oseman found herself wondering how it was that Charlie and Nick actually got together. Their back story grew out of sketches she drew when she should have been studying for her A-Levels.
A couple of years later, she launched Heartstoppercomic on tumblr.
Heartstopper Vol 1 was first published as a Kickstarter project in 2018. Hodder and Stoughton then published it in 2019.
I give you this much author detail, because all I can really say about this charming, heart-warming graphic novel is how much I loved it. It's sweet and cute and full of gentle, awkward teen romance. Charlie knows he is gay. Nick is still working it out. Meeting Charlie changes everything, for both of them.
Oseman has created a story that feels authentic and timeless. And there are two more volumes to follow.
The final pages include some costume (uniform) notes plus character guides that include birth dates, gender, Hogwarts house and Myers-Briggs Type Indicator. Lots of fun and highly recommended for anyone who loves love.

Posted by Brona Labels Graphic Novel, LGBTQIA, Teen Romance, YA at 4.6.20
Email ThisBlogThis!Share to TwitterShare to FacebookShare to Pinterest