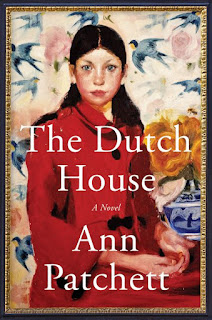 The rave reviews are the hardest, aren't they?
It took me a few chapters to fall into this story, but when I fell, I really fell! The Dutch House turned out to be one of those wonderful, rich reading experiences that you wish would never end. Part gothic fairy tale and part psychological study of two siblings trying to come to terms with their loss and grief as they did battle with a wicked stepmother. Eventually expelled from their childhood home, they spent their adult lives searching for forgiveness, atonement and a way back home.
The character driven storytelling was absorbing, poignant and immersive. Maeve and her brother, Danny were characters that felt real - flawed but lovable. Their shared obsession with the childhood home helped them to gloss over their other losses. Money and possessions didn't matter; they simply worked hard and made good on their own. No parent? No worries; they had each other.
But this is Ann Patchett we're talking about here, so there are many more layers to the story than that. Mothers and mothering played a big role as did materialism, greed and poverty. The different ways that kindness and love can be expressed and then experienced were explored. Do we ever really know our loved ones or do we waste a lot of time and energy trying to make them fit into the world view that we already have?
And we cannot talk about The Dutch House without talking about the house itself. As a metaphor for childhood and mother we see Maeve and Danny's mother reject and leave both the house and the children. As a place of shelter and protection, it clearly moved away from being a place of safety and security after the mother left and the stepmother wheedled her way in.
As a symbol for self and personality, it's easy to see the Dutch House as an ongoing search by Maeve and Danny for a way back in, for integration. Their sense of being outsiders, abandoned and alone affected all their relationships. The weight of the grudge they carried around almost became another character, like the house. Spending so much time in the car together, looking at the house from outside, facilitated a kind of therapy session for both of them. Although I was in a constant panic that the stepmother would discover them and that things would turn ugly, but that could just be my fear of conflict!
It's curious that a book that seems designed to discuss mothers and mothering is narrated by Danny. In fact, for the first few chapters, I assumed that Danny was a sister, not a brother. He acknowledged that 'after our mother left, Maeve took up the job on my behalf but no one did the same for her'. Maeve considered herself lucky simply because she'd had many more years with their mother than he did. At every point Danny benefited from all the women in his life who took care and made sacrifices for him, but when their mother finally turned up again and Maeve forgave her and immediately moved to recreate a relationship with her, Danny was pissed off that he's been displaced. I accepted that he didn't want to forgive or let his mother back into his life, but I did resent that he wanted to deny Maeve the chance to decide for herself, when it was so obvious that Maeve was dying to feel mothered again.
But maybe that was one of Patchett's points. It's okay for fathers and men to be distant and absent, we can admire them for their ambition and worldly ways, but when a mother does it, she is lambasted and denied forgiveness or understanding.
Maeve and Danny were not the only siblings in this story. We also had Jocelyn and Sandy, the women who helped run Dutch House before and after the mother left, until they were also expelled along with Maeve and Danny. The wicked stepmother arrived with two children of her own, Bright and Norma. None of these characters were fully fleshed out for the reader as we only ever got to really see them through Danny's eyes. He didn't even realise that Jocelyn and Sandy were sisters until he was about 11 yrs old. He simply accepted them, unquestioningly, as part of the fabric of his young life, as most children do.
I'm glad that Patchett never gave as any insight into why the stepmother was the way she was. She obviously had her own demons to behave the way she did throughout the story, but those demons remain part of the mystery. All we know is that her parenting style also completely alienated Norma and Bright. Bright didn't even return when her mother was ill and dying.
Patchett was inspired by something Zadie Smith said about writing autobiographical fiction,

She was saying that autobiographical fiction didn’t have to be about what happened — it could be about what you were afraid might happen. She said the character of the mother in Swing Time was autobiographical because that was the mother she didn’t want to be. I thought that was brilliant. It explained something I’d always been doing but had never put into words. I adore Zadie Smith. At that moment, sitting on a stage with her at Belmont University, I thought, I want to write a book about the kind of stepmother I don’t want to be.

Our book group had a great discussion about all the elements in the story and it was one of the few books where everyone agreed on how much we loved it. A number of them had even read the book twice, saying they got so much more out of the story second time round as they were able to tease out some of the nuances even more.
The Dutch House is a keeper.
I think this is my first 5 star rating for the year.
Favourite Quotes:

There are a few times in life when you leap up and the past that you'd been standing on falls away behind you, and the future you mean to land on is not yet in place, and for a moment you're suspended knowing nothing and no one, not even yourself.

We had made a fetish out of our misfortune, fallen in love with it.

Norma said that childhood wasn’t something she could imagine inflicting on another person, especially not a person she loved.