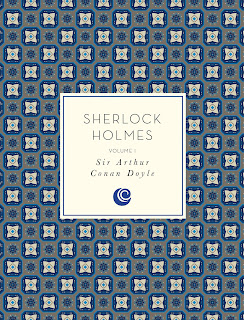 I've been wanting to read a Sherlock Holmes story for a long time now. I purchased my lovely Knickerbocker classic editions about five years ago with the good intentions of reading them in chronological order. Ever since then, I have been putting A Study in Scarlet on my CC Spin list, in the hope it would give me the good excuse I obviously needed to finally get started.
Last month, CC Spin #24 was the charm!
And I am now a convert to the Victorian world of Sherlock Holmes. I may be a little influenced by certain images from recent movie versions though, as in my head, Holmes looks rather like Robert Downey Jr and Watson looks quite a bit like Jude Law.
My edition has an Introduction by Roger Boylan, who helped me to understand that it was in fact, Watson, who was more like Doyle, in personality, than Holmes.

Sherlock Holmes is surely the one fictional character who is not only more famous than his creator, but whose personality, attitudes and interests are so completely his own, so different from those of his creator.

A Study in Scarlet is a quick, easy read. Many reports have suggested that this is not the best Holmes story by any means, which gives me high hopes for what comes next, as I thoroughly enjoyed this gentle, rather charming, 'consulting detective' story.

Narrated by Dr John Watson and set in 1881, we see Holmes through the eyes and opinions of others. Watson, of course, is our main source, but we also hear from the friend of the friend "Holmes is a little too scientific for my tastes - it approaches to cold-bloodedness", and even Holmes himself, "I get in the dumps at times, and don't open my mouth for days on end."
I really enjoyed seeing how Holmes and Watson met for the first time, and part of the pleasure of this story, is watching Watson, watching Holmes, as he experiences for the first time how Holmes likes to solve cases.
This one begins with a dead American, a message scrawled in blood across the wall and a ring. Holmes describes this case as,

the finest study I ever came across: a study in scarlet....There's the scarlet thread of murder running through the colourless skein of life, and our duty is to unravel it, and isolate it, and expose every inch of it.

Act two of the story is a bit clunky albeit fascinating as we unexpectedly get a back story about the Mormon's arrival in Utah (which was new to me and therefore very interesting. So much of US history seems to be tied up with religious fanatics and separatists, discord and intolerance).
Part way through this back story, some of the names start becoming familiar and we, the reader, realise we are getting the motive for the murders.
This section of the story caused Doyle some problems in later years. The Mormons were unhappy about how they had been depicted, especially the influence and behaviour of the Danite Band, who he described as being controlling, secretive, murderous thugs. At one point he came out and said,

all I said about the Danite Band and the murders is historical so I cannot withdraw that, though it is likely that in a work of fiction it is stated more luridly than in a work of history. It's best to let the matter rest.

Rather like an Agatha Christie whodunnit, the secret to discovering the who, why, when and how, with Holmes, is about understanding motivations and learning to see what is a clue and what is red herring. Holmes appears to be particularly skilled in this area.
A Study is Scarlet was thoroughly entertaining, and I will be back for more.
Facts:
Favourite or Forget: 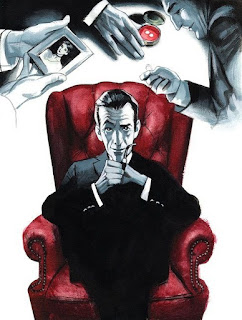 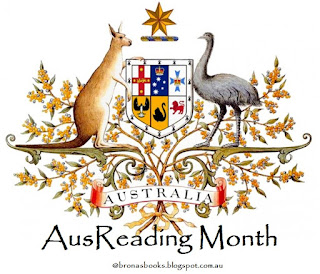