The Tragedy of the Korosko by Arthur Conan Doyle 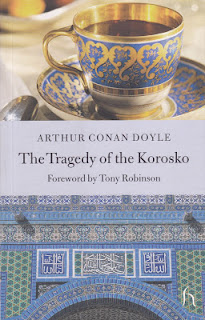 I first discovered that Arthur Conan Doyle had written books other than his Sherlock Holmes ones earlier this year when Carol @Journey and Destination reviewed The Tragedy of the Korosko.

It's a contemporary (for Doyle) fiction full of high drama and tension with political undertones. Global communities, religious freedom and personal responsibility are debated by Doyle's characters, with the fairly predictable 'winner' being good old England and Christianity.

First published in 1898, it follows the trials and tribulations of a group of very Victorian tourists cruising down the Nile who suddenly find themselves kidnapped by a group of 'desert warriors'.

Doyle captures the fear of the kidnapped group as they are led through the desert on camels perfectly. You can almost taste the sand and feel the heat and thirst.

Some reviewers have commented on the offensive racial stereotyping that Doyle's characters resort to, making allowances for the attitude of the times but calling it dated.

However, as I was reading these comments I couldn't help but note that the comments were far from dated. Yes, they were offensive and ignorant, but similar comments have been spouted in much more recent times by US Presidential hopefuls, Australian senators and too many newspapers and shock jocks to mention. These stereotypes and racial profiling comments are all too modern, and sadly, only serve to highlight how little the world has actually changed in over a hundred years.

The Tragedy of the Korosko is a quick, easy read with a fabulous cover!