I went to many events at the recent Sydney Writers Festival, but my favourite was the Pride and Prejudice lovefest on Sunday morning.

One of the guest speakers was Amanda Hooton who has written a modern day woman's dating guide to finding her own (modern-day) Mr Darcy.

Finding Mr Darcy is fun from start to finish. And it is also, quite surprisingly, very apt and practical advice for the modern single woman. 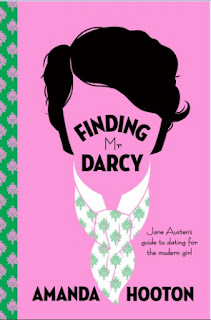 Hooton uses quotes and examples from all of Austen's novels to highlight her points and she explores the pro's and con's of all the main heroes and heroines.

Below is a little teaser of Hooton's four main points that the modern dating women should cultivate!

Be Nice: "For Jane, it's what you're like on the inside that matters....Jane's heroines are genuinely nice people. Even when they're occasionally excrutiatingly annoying (ahem, Emma Woodhouse, Marianne Dashwood, Fanny Price), you like them, because they're honest, kind and have a sense of humour."

Be Humorous: "All Jane's most beloved female characters manifestly possess what the personal ads coyly refer to as a GSOH. In fact, their SOH is not merely G, but E....Humour...helps us behave like adults....To employ humour - not to mention dignity, decorum, discretion, and other adjectives beginning with 'd' - in our daily dealings with the world."

Be Clever: "Jane Austen's heroines are rescued by men - mostly from fates as spinsters, governesses or parental wranglers. But they never, never hide their intelligence in order to provoke such rescue. All of them operate, at all times, to their full mental capacity."

Be Beautiful: "Jane is a realist. She understands that though it's not essential, beauty - at least as much of it as we're capable of - does matter. It's important to look nice and carefully groomed as we can, because it helps us put our best foot forward in society."


It's hard to argue with such obviously sensible advice.