The Home and the World by Rabindranath Tagore 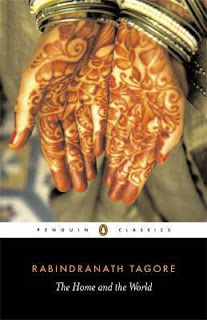 The Home and the World is a classic of Indian literature published in 1916 by Rabindranath Tagore. It was translated into English in 1919 by his nephew Surendranath Tagore.

For a summary of the book, details about Tagore's life and fascinating personal insights about life in India now, please see Cirtnecce's fabulous wrap up post here.

Truth is the big theme that runs throughout The Home and the World.

Whose truth is truer? Can truth be manipulated? Is there a universal truth?  Does truth equal right?

Tagore explores all these themes via his characters beliefs and actions during the Swadeshi movement in the early 1900's in Bengal.

The Swadeshi movement was a direct result of Lord Curzon's division of Bengal in 1905 which was part of the British 'divide and rule' policy in India (and in other countries all around the world that all still suffer the consequences of this meddling to this day).

The Swadeshi movement involved a boycott of all British goods in favour of locally produced crafts and industry.

Tagore supported this movement until violence began to creep into it. As with many causes that start for good reasons, dubious leadership and people with their own agendas to run, quickly turned the movement into one of mass looting and burning (of foreign goods).

Those that suffered the most were the poor peasants and traders who had all their wares destroyed with no compensation forthcoming and who could then, not afford the more expensive, and usually shoddily made, locally produced goods.

The self-righteous truth of the wealthy Hindu landowners and intellectuals soon became a living nightmare for the poor Muslim families suddenly without livelihood, income, shelter or anyone to turn to for help.

And so the crushing wheel of history rolled on.

In The Home and the World Tagore brings these struggles into the lives of his three main characters.


There must be two different persons inside men. One of these in me can understand that Sandip is trying to delude me; the other is content to be deluded.

Sandip is such an adept in setting music to his chant of praise that I cannot argue; I lose my power of seeing truth; my sight is clouded over like an opium-eater's eyes.


Nikhil's lessons in truth are hard won and based on observation:


I longed to find Bimala blossoming fully in all her truth and power. But the thing I forgot to calculate was, that one must give up all claims based on conventional rights, if one would find a person freely revealed in truth.

I have seen from our boyhood what a juggler with ideas is Sandip. He has no interest in discovering truth....But those who deal in delusion end by deluding themselves, and I fully believe that, each time Sandip creates a new fallacy, he persuades himself that he has found the truth, however contradictory his creations may be to one another.


Sandip's truth is that of the manipulator out to serve his own needs:


The truth we must build up will require a great deal of untruth in the process.


The primary difference and tension between Sandip and Nikhil is summed up with this conversation,

'The result I seek,' answered Nikhil.'belongs to all time.'

In many, many ways, The Home and the World is an example of the age old story of youth - full of vigour and arrogance that theirs is the new age, that right is one their side simply because they are young right here and now, versus the more circumspect, mature, experienced older man of the world who has had time to work through all the disillusions of youth and to realise that the world is a much bigger and far more nuanced place than any twenty two year old could possibly conceive or imagine. And that life is so much more and so much longer than what seems to burn so brightly at twenty two.

Sandip describes the arrogant, youthful view of history and life very clearly with these words:


We are men, we are kings, we must have our tribute. Ever since we have come upon the Earth we have been plundering her; and the more we claimed, the more she submitted. From primeval days have we men been plucking fruits, cutting down trees, digging up the soil, killing beast, bird and fish. From the bottom of the sea, from underneath the ground, from the very jaws of death, it has all been grabbing and grabbing and grabbing - no strong-box in Nature's storeroom has been respected of left unrifled.

The one delight of the Earth is to fulfill the claims of those who are men. She has been made fertile and beautiful and complete through her endless sacrifices to them. But for this, she would lost in the wilderness, not knowing herself, the doors of her heart shut, her diamonds and pearls never seeing the light.

Likewise, by sheer force of our claims, we men have opend up all the latent possibilities of women. In the process of surrendering themselves to us, they have gained their true greatness. Because they had to bring all the diamonds of their happiness and the pearls of their sorrow into our royal treasury, they have found their tru wealth. So for men to accept is truly to give: for women to give is truly to gain.


This level of arrogance and self-delusion is incapable of rational thought or logical debate. It is also incapable of seeing things from another's perspective. It is all about the self and justifying their own actions and getting what they want now.

In it one can also see the seeds of climate change denial and anti-feminist rhetoric.

Tagore is also of his time and by the end of the book he is clearly on the side of there being a higher form of universal truth imbued with a moral imperative that is a bit more right and true than anything else on offer. In other words, Nikhil's view of the world.

It's a view of the world that is more balanced and rational and thoughtful than Sandip's, but it still assumes that there is some kind of universal truth that oversees us all and that fits us all the same way.

However that is a more modern discussion that still has no clear solution in sight. 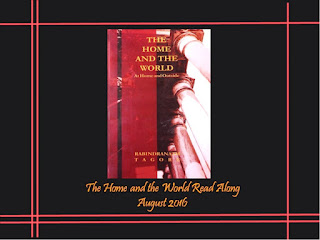 There is plenty more to say about this book, many more themes and ideas to explore, so please feel free to pose, provoke and question in the comments below or over at Cirtnecce @Mockingbirds, Looking Glasses and Prejudices, who hosted the readalong for this book.