Regular visitors to my blog know that at Christmas time I need safe, easy reads to get me through the crazy season in one piece. This year Three Wishes played its part perfectly. 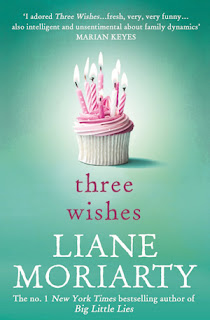 The story of a set of triplets - two identical, one fraternal, seemed a bit contrived at the outset, but after a little settling in period, I was quickly on board with Moriarty's very first story concept.

She had me hook, line and sinker, by the time her characters were dancing to Bananarama's Venus - the song Mr Books and I danced to on our very first date 30 years ago! This book is also Moriary's most Sydney-centric story. Her characters go to Balmain markets (when that was the thing to do), eat out in the city, and live in houses with glimpses of the harbour. Reading books set in your own neighbourhood that make your own life and your own story seem book-worthy are powerful things indeed!

Relationships are what keep her stories spinning round - sisters, brothers, parents and children are the focus of this story with all the steps, halves and ex's that our modern society expects. Her characters love far more drama and self-imposed complications that I would be comfortable living with, but that's part of the fun. Revelling in the foolishness and over the top behaviour of others is what makes Moriarty's books just so darn enjoyable.

This may be Moriarty's very first book, but it's a stand out story and a very impressive debut. Her books always have plenty of heart and soul and humour - Three Wishes is no different. And I will never view forks and their projectile possibilities the same way ever again!

I'm now all caught up with Moriarty's back list. Which means waiting patiently for her next book...which I believe is scheduled for later this year - wahoo!

My Favourites - from most loved to not so much: