The Unicorn by Iris Murdoch

My intention this year was to read through my handful of Iris Murdoch books with Liz @Adventures in Reading for her #IMreadalong. She's reading all of them, one a month, in chronological order. I only have to slot in five books, but so far I've been woeful at sticking to her schedule. Fortunately Liz has been very gracious about allowing me to join in whenever I get around to reading the book and reviewing it. 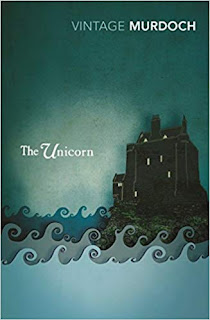 The Unicorn was the book to read for May. In my defence, it only came into my possession in June, after seeing The Unicorn and the Lady tapestry exhibition at the Art Gallery of NSW. At the time I didn't believe that there was any direct correlation between the tapestries and the book, except for the word unicorn, but upon reflection I can see some shared symbolism.

The six tapestries are thought to represent the five senses plus a sixth one representing the soul or morality. It is undecided whether the woman in this final tapestry is putting away her jewels into a casket, or taking them out. Is she putting away the symbol of earthly pleasure, desire, free will and sexual pleasure or is she a virgin about to embrace earthly, carnal pleasures for the first time, knowingly and deliberately?

The unicorn 'is also the image of Christ' according to Max, but in courtly tradition a unicorn symbolises purity, chastity and knowledge. Hannah as unicorn makes quite a bit on symbolic sense, although once I read that Hannah had a 'plentiful mass of red-golden hair' I began to imagine she looked more like the unknown, mysterious lady in the tapestries. A woman who didn't know whether to embrace or push away her desires.

Certainly one of my desires was satisfied by the very appealing Vintage Classics cover by Liam Relph. The various shades of green soothed and agitated me at the same time. The darkened castle, the tempestuous waves, the fading light all added up to a heightened sense of mystery and menace.

The incredible landscape of County Clare was the very first thing that struck me as I started reading. The land is described by Murdoch as appalling, God-forsaken, dreadful, grotesque and sublime. Her protagonist, Marion finds the 'vast dark coastline repellent and frightening. She had never seen a land so out of sympathy with man.'


Marian had read about the great cliffs of black sandstone. In the hazy light they seemed brownish now, receding in a series of huge buttresses as far as the eye could see, striated, perpendicular, immensely lofty, descending sheer into a boiling white surge. It was the sea here which seemed black, mingling with the foam like ink with cream.

The sea was a luminous emerald green streaked with lines of dark purple. Small humpy islands of a duller paler green, bisected by shadows, rose out of it through rings of white foam. As the car kept turning and mounting, the scenes appeared and reappeared, framed between fissures towers of grey rock which, now that she was close to it, Marian saw to be covered with yellow stonecrop and saxifrage and pink tufted moss.

The landscape had become a trifle gentler and a little dried-up grass, or it might have been a tufted lichen, made saffron pools among the rocks. Some black-faced sheep with brilliant amber eyes made a sudden appearance on a low crag, and behind them rose the dolmen against a greenish sky. Two immense upright stones supported a vast capstone which protruded a long way on either side. It was a weird lop-sided structure, seemingly pointless yet dreadful significant.


Looking, views and scenes are the predominant theme of The Unicorn. Everyone spends the novel looking in mirrors or out windows, and of course, the main house is call Gaze Castle. But other than the gorgeous, dramatic scenery, I'm not quite sure what we're meant to actually 'see'.

Maybe what I'm beginning to see is that Iris Murdoch had some issues of her own. I'm not sure that she liked people very much and she certainly didn't have a very high opinion of relationships. At least loving, healthy, adult relationships don't seem to feature in her books very often, but then, where's the story in that!

Perhaps the 'seeing' and 'gazing' going on here is all internal - navel gazing and psychological musings. The book that Marion reads with Hannah early on is called La Princesse de Cleves. I had to look this one up to find that it was a French novel published anonymously in 1678 and according to wikipedia, 'is regarded by many as the beginning of the modern tradition of the psychological novel'. It's a story of seclusion, spurned lovers, fidelity (or the lack thereof) and suffering. Another connection!

Seclusion, strange love and suffering certainly abounded in The Unicorn, as well as existential angst, confinement and a vague hint of domestic violence. Our characters also played a tug of war with the power of choice and non-choice and imprisonment versus freedom. Yet it's the potential of story (especially the stories we tell ourselves) to transform, inspire and escape that drives our characters to their various fates.

Another reference that had me reaching for google was that of Ate. 'Ate is the name of the almost automatic transfer of suffering from one being to another.' Max goes on to explain his thoughts more until he suggests that Hannah might be 'a pure being who only suffers and does not attempt to pass the suffering on' thereby ending the cycle or the power of the Ate.

Ate is the Greek goddess of mischief, delusion, ruin and folly. It can also refer to the action of the hero that leads to their downfall or death - the very first case of pride cometh befall the fall! And of course, The Unicorn has it's very own and very literal fall.

I'm sure there's also lots of stuff to be explored around Murdoch's continued use of the sea, the bog, the giving of dresses and jewellery, the situation of the two houses, all the donkeys and fish references and the seal. Hopefully when I go to visit Liz's review page after posting this, I'll find some more answers, or at least ask some better questions!

I should also read the Introduction again. I tend to skim it before starting to pull out a few of the main themes to help me on my way. Occasionally this backfires, when I accidentally read a spoiler, but mostly I can see them coming and skip over that section, until I can come back to it when I finish the book. One of the things I did get from the Intro by Stephen Medcalf, was Murdoch's fascination with Plato and Simone Weil (French philosopher, mystic and political activist 1909 - 1943). Two more things for delve into before reading my next Murdoch.

Of the three Murdoch's I've read so far, this has been my favourite. It had a vague Rebecca by Daphne du Maurier feel to it (that would be that Gothic thing I guess!)
I loved the melodrama and sense of menace and suspense that built up throughout the novel. It was eerie and creepy and disturbing as the characters became more and more insular and introspective. Love became twisted and bent out of shape. But there was always hope. As Effie said,


Love holds the world together, and if we forget ourselves everything in the world would fly into a perfect harmony, and when we see beautiful things that is what they remind us of.


Too bad he was delusional and delirious at the time!

Flight From the Enchanter
#IMreadalong
Liz's The Unicorn round-up post.
This was my latest #CCspin and book 18 of my #20booksofsummer (winter) challenge.
Posted by Brona Labels 1963, 20 Books of Winter, CC Spin, Gothic, IMreadalong, Ireland, Plato, Readalong at 16.8.18
Email ThisBlogThis!Share to TwitterShare to FacebookShare to Pinterest