The Yield by Tara June Winch

I've been trying to write a review for The Yield by Tara June Winch for the past week that would do it justice and adequately describe my reading experience. But I'm so tired and under the weather with a foggy brain and raspy throat that nothing is coming out right.

So, let me just simply say how much I enjoyed this story. From the beautiful cover to the endearing protagonist, August and her amazing Poppy Albert, the dictionary maker. It's not often that I tell you to read a book, but this is the one. The Yield is not just a highly recommended, but a must read.

The main themes centre around grief, loss, missing and belonging. We have a missing child, a missing book and all of our characters miss the recently deceased Poppy.

We have lost language, lost country and that sense of loss for those no longer with us as well as times gone by. 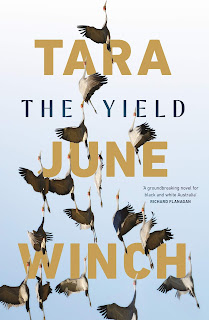 Three different perspectives are explored by Winch in this multi-generational story. We have August's contemporary story. A young Indigenous woman, living abroad, running away from her losses, trying to work out who she is and how she fits into this modern world. Poppy's death is the catalyst for bringing her home to Prosperous House.

Poppy Albert is the heart and soul of the story. His first person story is told via a dictionary of Wiradjuri words. Like the Oxford English Dictionary, we get a definition of the word with an example of the word in use. But it's not just any old example. Albert uses the dictionary to relate family stories, pass on culture, myths and legends to be 'proud of our culture again'. These sections of the book are inspired and revealing.

The third perspective turns up later in the story when we get a few letters written by the Rev Ferdinand Greenleaf, the minister who established and ran Prosperous Mission in the early part of the twentieth century. His letters cover the period around 1915. As a German national, he is now under suspicion thanks to the war. He is trying to get funding and government guarantees to protect everyone staying at Prosperous. He documents some of the violence and mistreatment of the local Aboriginal tribes.

Winch's moving story reminds me once again that Indigenous culture is not a unified whole. And that's okay. Like every other culture, different groups within that culture want different things. Poppy Albert's family, faced with the sadness of his death and the tragedy of dispossession as a tin mine tries to take over their property, all react differently - some want the money, some want to stay on the land, some want to remember the past, some want to forget, some want to fight, some want to give in.


Her mouth ached for something more, wanted some unknown balm, not a kiss, or a meal, or a drink, but something long denied....The feeling that nothing was properly said, that she'd existed in a foreign land of herself. How she saw home through the eyes of everyone else but her.


How she was scared to leave, even more scared to stay.


But in every mobile-library book, she could never find herself or her sister. Never a girl like August and Jedda Gondiwindi, not ever.


'Just tell the truth and someone will hear it eventually'.


searching, looking around - ngaa-bun-gaa-nha When I turned fifteen and was too old for the Boys' Home I was a ward of the state still, working the local properties. At nineteen I was issued my dog tag. With it I could travel in a certain distance to work for meat and salt on the field or out mustering. I moved around far and wide looking for work, but I was looking mostly ngaa-bun-gaa-nha for home.


So much to unpack in just this one definition. Why was Albert a ward of the state in a Boys' Home?  Dog tags! Lack of freedom, working for food not wages, loss of family and home and belonging. Every one of Poppy's definitions has this same sense of the universal wrapped up in the personal.

ashamed, have shame - giyal-dhuray I'm done with this word. I'd leave it out completely but I can't. It's become part of the dictionary we think we carry. We mustn't anymore. See, pain travels through our family tree like a songline. We've been singing our pain into a solid thing. the old ones, the young ones, are ready to heal. We don't have to be giyal-dhuray anymore, we don't have to pass that down anymore.


I was also taken with this very simple, but clearly prescribed view of Indigenous religion:

Biyaami is the creator, but we don't worship him or his son. We worship the things He made, the earth.


After I met my beautiful wife, although beauty was the least of her, strong and fearless was the most of her - well she taught me lots of things.


Favourite or Forget: Not only a firm favourite but possibly a reread as well. I will certainly be reading more by Winch in the future.