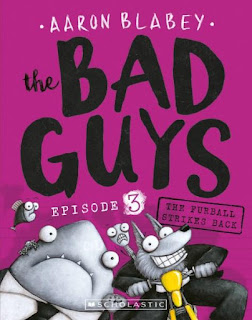 To my mind, Aaron Blabey can do no wrong!

In Episode 3 The Furball Strikes Back, we find our four +1 bad guys coming face-to-face with the baddest, most evil of all creatures - Dr Rupert Marmalade, the guinea pig!

Mr Wolf, Shark, Piranha and Snake have now been joined by Legs, the Tarantula. There is growing dissension in the ranks about whether or not being good guys is really working for them.

Mr Wolf's constant cry of "It's time to be heroes!" is rubbing some of them the wrong way.

Falling into the evil clutches of the grandiose and rather mad Dr Marmalade only creates more friction amongst our lovable heroes.

In the background, though, there is another dark and mysterious character jumping about - will this illusive figure be a force for good or evil?

And how will our Bad Guys foil the dastardly plans of Dr Marmalade?